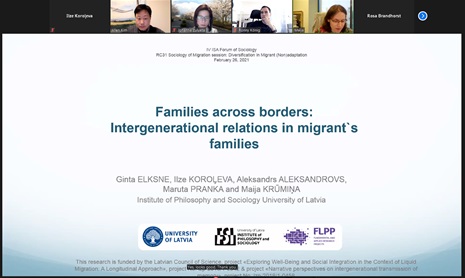 Considering the size of Latvia’s population, which hardly reaches the two millions mark, the significant drop of population during the past decade driven by emigration poses a serious challenge. Latvia is one of the typical ‘sending countries’ in Europe, and since year 2000 about 10% of it’s population has emigrated. Recent trends indicate that families from Latvia are more likely to emigrate with their children. Less are families that are emigrating with their parents, even though studies have shown that the link with the relatives in Latvia is still strong. The family is not just an economic resource or emotional support; it is one of the foundations that allows us to carry on the language, the values, the cultural traditions. According to life story interviews with expatriates and their relatives in Latvia, as well as qualitative research data, relationships between family members play an important role in maintaining family ties, preserving language and traditions, and maintaining the link to the homeland. This report will focus on the relations between migrants and their family members (more specifically, on migrant`s parents who are left behind in the Latvia) and what is the intergenerational link between family members living in different countries, transnational families. In our research, we will combine quantitative survey and qualitative data (known in sociology as triangulation). Analysis is based on both qualitative biographical interviews collected in the Latvian National oral history collection according within the frame of Latvian Council of Science (LCS) grant «Narrative perspectives on intergenerational transmission of memory» (No. lzp-2018/1-0458) and quantitative data derived from large-scale web-based Latvian emigrants’ surveys (n=14 068, European Social Fund grant «Latvian Emigrant Communities», 2014) and 2nd wave of longitudinal survey within the frame of LCS grant «Exploring Wellbeing and Social Integration in the Context of Liquid Migration» (No. lzp2018/1-0042, 2019).